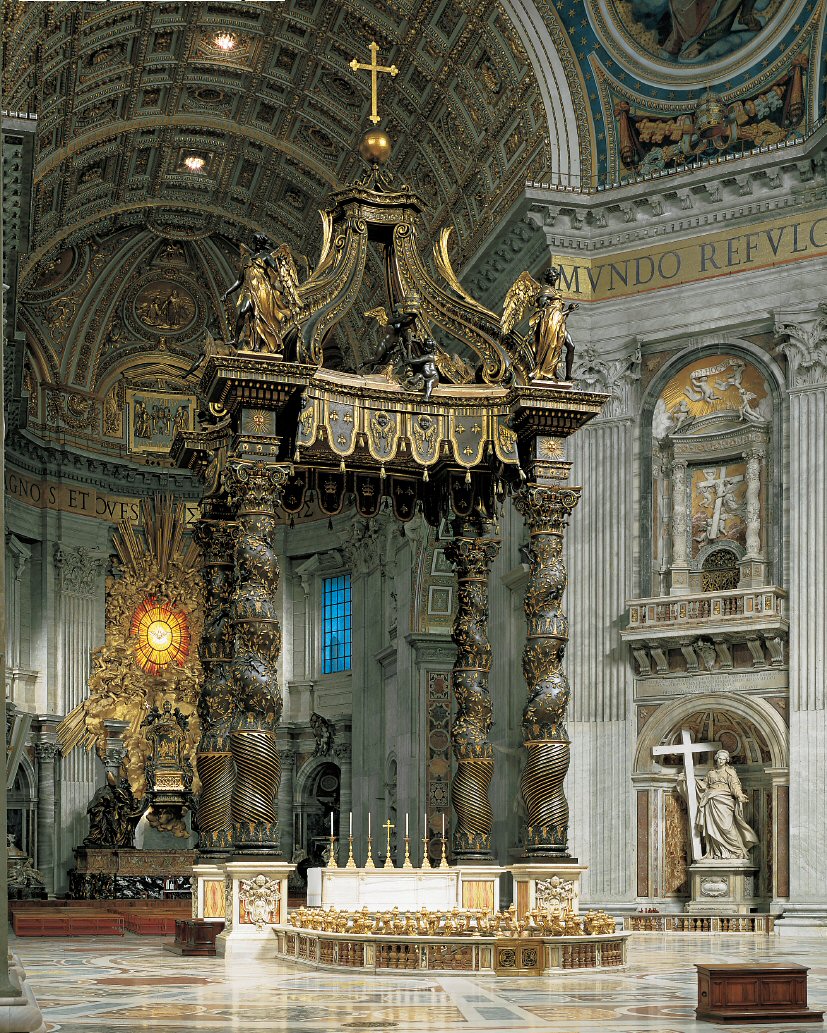 Central to the connection between Michelangelo’s cupola and Peter’s tomb is the superb bronze baldachin by Gian Lorenzo Bernini. In the midst of the vast basilica, there was the real possibility that Peter’s memorial—rather than remaining at the center of everything—might actually disappear. It was for this reason that Urban VIII, immediately upon his election in 1624, chose “his”sculptor, who he had known from the time he was a youth, to make a dramatic contribution to the Basilica. Specifically, Urban wanted Bernini to create a huge baldachin for the main altar, as if to put a crown over the Apostle’s sepulchre.

Bernini conceived this architectural masterpiece as an immense piece of sculpture, a bronze construction fully twenty-nine meters high. Indeed, it was taller than any of the Renaissance palaces in Rome. And yet it somehow communicates a sense of celestial lightness. To our eyes, the twisting movement of the bronze columns suggests a spiralling ascent that loses itself in the bluish-gold light emanating from the mosaics above. These, located in the cupola, depict first Paradise and then (in the very cap of the lantern) God the Father. In effect, the twisting columns of the baldachin repeat the shape of the columns which supported Constantine’s ciborium. Eight of these now adorn the four balconies of the pilasters in the cupola, bearing witness to the continuity between the Medieval and the Renaissance ardor in keeping alive the memory of the Apostle.

So far we’ve been magnetized by the vertical line that rises heavenward from the memorial to the Prince of Apostles. But the horizontal line is no less impressive.Take as an example the entrance to the Basilica. There are five large doors leading into the interior. The door to the far right is the Porta Santa, which is sealed shut and is only opened during a Year of Jubilee. The middle door, with shutters in bronze, was made by Filarete in 1439-45 and was already a part of the earlier basilica. Indeed, the door was the first great work of Renaissance art executed in Rome, although done by a Florentine. Of its six panels, two are dedicated to the martyrdom of Peter and Paul, whereas four horizontal strips narrate the principal episodes in the effort to reunite the Eastern and Western Churches. On the extreme left is the Door of Death (1964), on which the sculptor Giacomo Manzù depicted various ways in which a man might be martyred.