The close rapport between tomb-altar-basilica resembles the chain of spiritual succession that is similarly enacted with a ritual like the laying of the hands. Such a connection—at once physical and spiritual—keeps Peter “alive”today in his 263rd successor. It amounts to nothing less than a spiritual patrimony that echoes down the centuries, impervious to the vicissitudes of history. Through its most important Bishop, the Church of Rome remains one with its Divine Founder. In this sense, the Vatican becomes a sacred island, a type of new Holy Land. Indeed, it appears like a New Jerusalem, come into being between the two comings of Christ: the first in historic Jerusalem, the second with the Second Coming.

This is what Dante—a pilgrim at the first Holy Year in 1300—alluded to when he had Beatrice declare E sarai meco sanza fine cive / di quella Roma onde Cristo e’ Romano (“you shall be with me until the end of all things / in that Rome where Christ is Roman”). As we see, the poet sang of Rome as nothing less than the symbol of the heavenly Jerusalem. It is for this reason that the Vatican can never be merely a museum, for all that it is one of the most prestigious in the world. 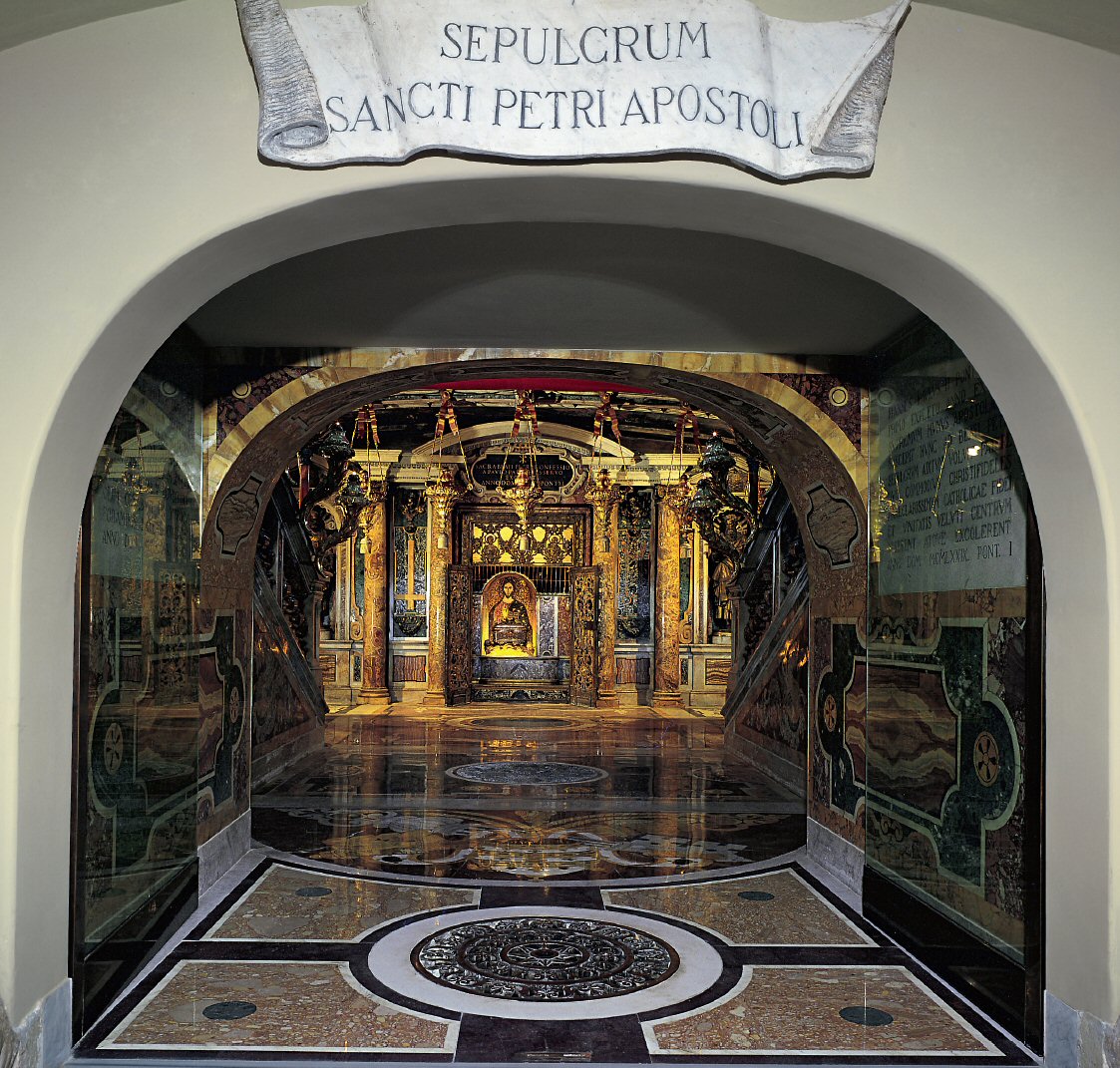 Next to Peter’s tomb, both in the Vatican grottoes and above in the Basilica itself, repose the remains of 147 popes including all those who have reigned in this century. In the spacious church with its nave and two aisles, there are many sarcophagi. Indeed, you can find there a small compendium of European history: the tombs of the German Emperor Otto the Great, Carlotta di Savoia Queen of Cyprus, Queen Christina of Sweden, James III with the last Stuarts. But always and forever, at the center of everything is the sepulchre of the Apostle Peter. The lower niche of the Monument to Peter is known as the Nicchia dei Pallii.We see there the small golden casket containing the Pallii (the outer liturgical insignia of the bishops’ authority). Below it is visible a small opening in the marble slabs. Through there, pilgrims used to lower little bits of cloth in order to automatically make them relics.

From a small grille in the ceiling of Clement’s chapel we can actually look up toward Bernini’s baldachin and beyond—all the way up to Michelangelo’s cupola. By doing so, one has the impression of observing a vast religious undertaking from its very source; from the place, as it were, that it has both guarded and preserved for two millennia. This is the meaning of the triumph of Faith. And if the greatness of Peter’s temple soars over the little tomb, we know it is still the latter which buttresses and exalts everything built above it.