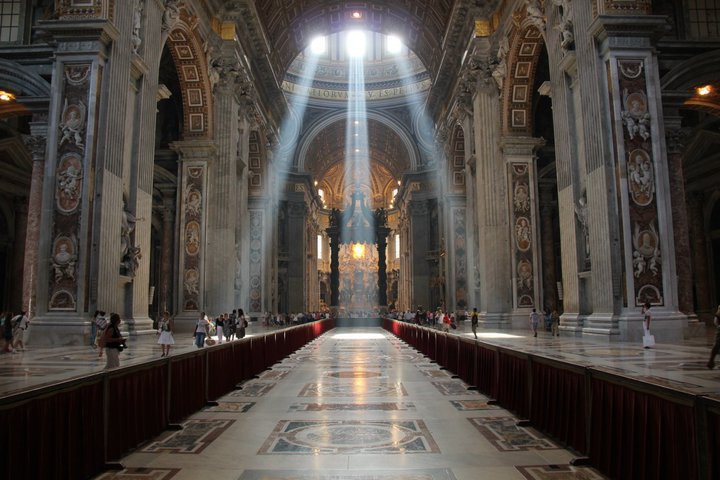 From the very entrance, the main theme of the basilica is evident. The vast central nave with its barrel vaulting 44 meters above ground; the procession of thirty-nine early saints appearing in their niches; the twenty-eight allegorical figures representing the virtues jutting out from the large cornices; the pilasters in precious marbles; the arcade of seemingly triumphal arches—all these draw our gaze in the direction of Bernini’s baldachin. It looms before us like a call to prayer above the tomb of the Apostle.

From the baldachin, we naturally look toward the end of the apse and the huge reliquary made by Bernini between 1658 and 1666. Enclosed within is a wooden chair or pulpit believed to have belonged to Peter. In reality, recent studies have revealed that it was a royal throne that the Carolingian sovereign Charles the Bald had made for himself. Probably he presented it to the pope on the occasion of his imperial coronation as Holy Roman Emperor in the Basilica at Christmas in 875.

At the base of the throne are four large statues of early doctors of the Church: the Latin Ambrose and Augustine, and the Oriental Athanasius and John Chrysostom. With their stately gestures they seem to be upholding and
sanctioning the authority of the pope, directly inspired by the Holy Spirit. Indeed, the hovering Holy Spirit is depicted as source of all light and wisdom by Bernini’s inspired choice of employing yellow-gold Bohemian glass to filter the light.

With the intuition of the genius he was, Bernini was anticipating the times. The placement of the Holy Spirit above the pope seems a prelude to the Dogma of Papal Infallibility, proclaimed in this very basilica during Vatican
Council I in 1870. And the presence of the four doctors of the church from East and West would seem to evoke the doctrine of episcopal collegiality affirmed by Vatican Council II in this very setting between 1962-65.

Every work of art within the basilica makes us ponder the unfathomable mystery of the Faith and the Mystical Body of Christ. When the aisles of the Basilica are filled for a papal celebration, everything seems in synchrony between the assembled throngs and the physical fact of the church around them. And it gives us an unequalled emotion to sing out at full volume beneath these vaultings “Et unam, sanctam, catholicam et apostolicam Ecclesiam” (one, holy, catholic and apostolic church). How much greater is the emotion of this profession of faith when the ceremony in question is presided over by the successor of Peter, and the crowd before him
consists of a multiracial assembly of the faithful!

Here it can be said that the very stones reflect the life of the spirit.“Stones of Light,”in fact, is the title of some verses written by the young Bishop Karol Wojtyl/a in the fall of 1962 when, with 2,300 other bishops, he sat here every morning for the first session of the Council. Some of the lines were inspired by the basilica, whose stones “unify not only the spaces of a Renaissance structure but the spaces within us.” “This is the rock,” he wrote, “of a massive temple, it is the pasture that brings us to the cross,”concluded the future pope.

Nor is it true that it is difficult to pray inside St. Peter’s. “Choose any of the chapels,”wrote Monsignor Ennio Francia, “and you’ll suddenly find yourself alone on this holy land, blessed by the blood of Peter and that of the first Christian martyrs. The building has magic, it has all the splendor that could possibly render homage to the Revelation that toppled paganism and built a new civilization on its ashes.”

This vast church was modelled to express greatness, and in so doing to buttress the Counter-Reformation. The central nave was lengthened precisely in order to convey the concept of immensity and to accommodate the grandiose ceremonies and extensive processions. It was inconceivable to abandon a sacred area as rich in religious connotations as the one, amid which rose the nave of Constantine’s temple.

In our time, the immense central nave has been turned into the Hall of a Great Council. That great length has become synonymous with universality. The historic events of the Church, the solemn celebrations, the canonizations and beatifications, the councils and synods, have always found there an adequate backdrop. The concrete expression in architecture of Peter’s profession of faith helps us to concentrate our gaze on his successor, the visible vicar on earth today. From the Apostle to the Church, from the Church to the pope. The basilica thus serves to connect all this. All three stand beside Christ, whose cross is everywhere triumphant and whose words—spelled out for all to see along the basilica’s great horizontal trabeation—serve to fuse forever faith and art.