Inside, one is overwhelmed by the gold, the sumptuous statues, the solemn funerary monuments of the popes, and above all by the great scenographic triumph of Bernini’s baldachin above the confessional altar. Inevitably, we are filled with a feeling of reverence and awe in the presence of so much grandeur. Nor is the interior of St. Peter’s, as some have suggested, a purely theatrical experience. After the initial impact, the pilgrim begins to comprehend the sacred message that the building imparts.

The entire construction is dedicated to Peter’s special mission. Indeed, the great block letters at the base of the tambour beneath the cupola say as much: “Thou Art Peter, and Upon This Rock I Will Build My Church.” We understand then that we are in the presence of an architectural masterpiece that is also a theological edifice. No other church in the world can proclaim itself the visual expression of Christ’s words. If Peter is the rock upon which the community of believers was founded, this basilica, rising out of a sublime profession of Faith, is surely its visual realization.  Everything we look at is an artistic expression of Christ’s mandate. 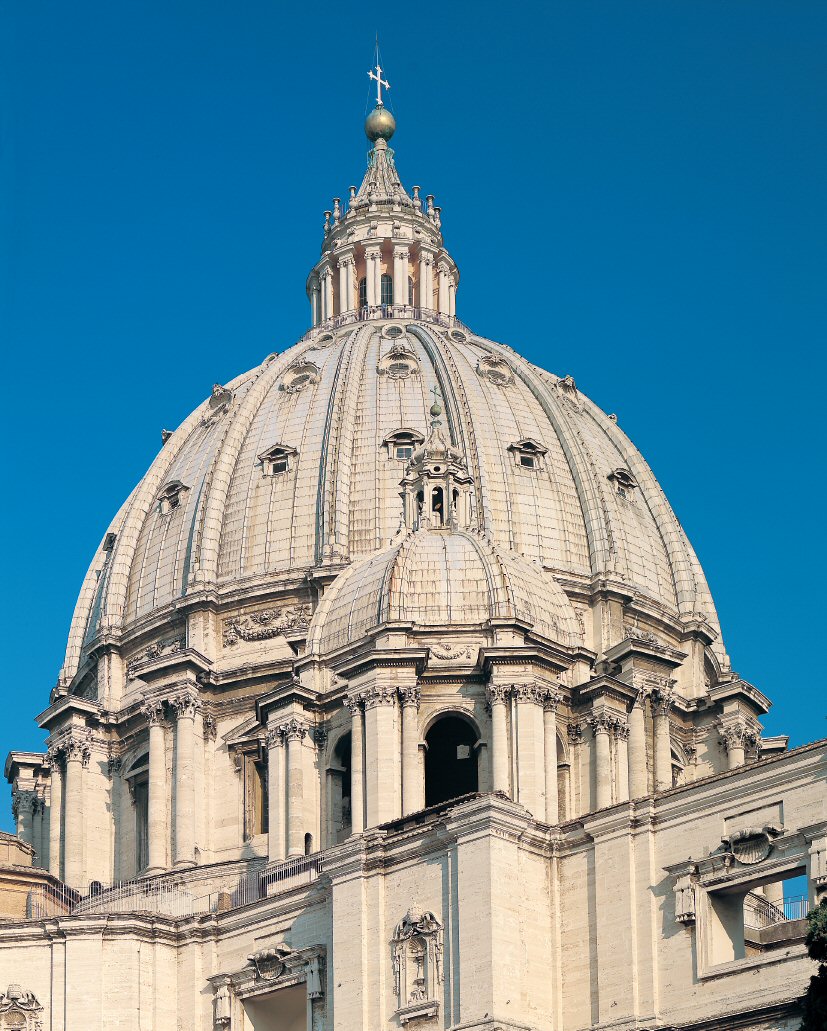 If we go to the outside of the apse and study Michelangelo’s arrangement of windows, pilasters, geometric panels, cornices and dripstones, we perceive a message that is not merely artistic.We can intuit the solidity of the Church through the great horizontal lines before us. At the same time, the powerful vertical thrust of the mighty pilasters is crowned by corinthian capitals. A tension tending toward transcendence is strongly evoked by the propelling force of the cupola, something made emphatic by the sixteen double columns with vaulting ribs that lead all the way up to
the cupola’s skylight.

The cupola, with its massive profile, seems to be yearning for universality. Michelangelo wanted it immense, so that it would “embrace all the Christian peoples of the earth.”The inside of it could be a pictorial description of Paradise itself. Through the sixteen large windows, broad ribbons of shimmering light might appear to the visiting pilgrim as if forming a staircase down from heaven itself. So strong was the writer Stendhal’s impression of the place that he made the following entry in his journal. “It would be impossible not to be awed by a religion that has produced such works. Nothing in the world can compare with the interior of St. Peter’s. Even after a year’s residence in Rome, I would go there for hours to bask in the beauty of it.”

The novelist then suggests that the visitor go directly beneath the cupola.“You must sit on a wooden bench and lean back as far as possible.That way, it will be possible to rest while contemplating the immense void that hovers above. However little one might possess of true spirituality, the imagination cannot fail to be staggered by the experience.”